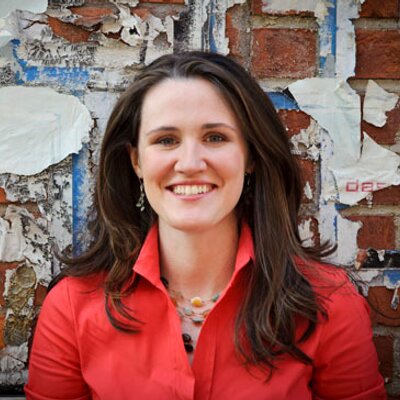 Standing behind her parents’ door, she watched her mother and father inject needles into their skin, administering drugs into themselves that they had bought with their welfare checks.

She knew the routine: the welfare check would come in the mail, mom and dad would go buy drugs and the food in the house would only be present if there was enough money left over.

She walked into her bedroom to get a tube of flavored chapstick to eat, as a result of there not being any food in the house.

Somehow, she still believed in the most powerful source — herself.

Liz Murray sits down at her computer on a busy day in New York City, balancing a master’s program and two kids. As she writes, she explains how she went from being homeless to going to Harvard.

“I sat outside the kitchen door in my stroller,” she shares with the BBC World Service. “In fact, I pulled it right up to the door; and then, eventually, I did this so often – and they used drugs so often – they began to leave the door open.” She recalled her early days of growing up in the Bronx of New York City, where she was forced to learn to adapt to the lifestyle of two drug addicts and alcoholics — her parents. They loved her, but they produced an environment of what she describes as the “aftermath of a 70s afterparty.”

With an excess amount of cocaine, heroin and alcohol, Murray’s parents eventually contracted HIV/Aids – her mother passing away when she was just 15 years old. Her father, afterward, went to live in a homeless shelter.

Although her mother’s death was the worst thing that had happened to her, Murray felt a form of a wake-up call that entailed a force to push her back to school. She was 17 years old with an eighth grade education.

According to her memoir, Breaking Night: A Memoir of Forgiveness, Survival, and My Journey from Homeless to Harvard, Murray wanted to break the cycle of homelessness: her grandmother had been homeless, her mother had been homeless and now she was homeless.
“When is the cycle going to end?”
That was the question she repeatedly asked herself in her head.

“I looked at my other options, and to consistently fight was my best option,” said Murray in a personal email interview, explaining why she chose to take a different path and return to school.

She walked down the New York City streets in old, baggy clothes and tangled hair. She went from high school to high school, knocking on multiple schools’ doors for enrollment, having each door slammed in her face.

“Any time that you get rejected, it hurts. Doubt starts to have a hold of you,” she admitted. “These were people who I knew were rejecting me as a person and not an idea that I had. When someone rejects your idea, while disappointing, it doesn’t truly hurt your soul or spirit; when someone rejects you personally, your soul takes a hit.”

After being rejected from every school – not because of her educational level, but because of their judgment on the way she looked – she remembered advice that her mother had once given her.

“My mother told me about her dreams: how one day things will be better; one day she will be sober — later, ” she said. “But what I’ve realized is ‘later’ is just an illusion – your life is happening right now.”

Murray took the change, for which she had begged, to go back on a train and search more schools. She found herself at Humanities Preparatory School, where she met her mentor, Perry Weiner.

Determined to succeed in school, she took 10 classes per semester. This allowed her to finish four years of high school in just two years, obtain a 4.0 grade point average and earn herself the number one spot in her graduating class.

Murray’s hard work paid off when Weiner took the top 10 students on a trip to Harvard University, where he encouraged her to apply. At the same time, nevertheless, the New York Times was offering a full-ride scholarship to six people who could explain any obstacles they have overcome in their lives.

Murray immediately filled out the scholarship application, in which she included the fact that she was homeless. She then proceeded to fill out the application to Harvard.

“When I was finally accepted, I felt that it was an opportunity that I had to take advantage of,” she said. “I knew that the amount of effort I put into going to school was going to be a defining moment in my life. It was a challenge, and very difficult, but very rewarding at the end.”

Murray graduated from Harvard in 2009 with a Bachelor of Science degree in Psychology. However, her success didn’t end there.

“When I won the New York Times scholarship, they wrote an article on each of the winners,” she shared. “In the article, they shared my story and directors and producers started contacting me about turning my life into a movie.”

From Homeless to Harvard: The Liz Murray Story debuted on Lifetime on April 7, 2003. It became an Emmy-nominated film and was featured on ABC’s 20/20, according to Moviefone.

All of this success caught Oprah Winfrey’s attention, which led her to give Murray one of her first of 10 Chutzpah awards: awards given to women who have gone through thick and thin, but made it out successfully.

With so many ears listening to her story, Murray decided she wanted to write her story into a memoir, of which she gave samples to Hyperion Books.

“I started writing my memoir 10 years before it was released,” she recalled. “It was extremely difficult because I had to relive some very difficult moments in my life. This was one of the reasons that it took so long to finish it.”

The length of time was worth it when she released her book, Breaking Night: A Memoir of Forgiveness, Survival, and My Journey from Homeless to Harvard, in September 2010 and found out that it was the number one educational book on Amazon, as well as the number one book on kindle after two years of its release – all of which was spread by word of mouth.

Still striving and working toward more success, Murray created a non-profit organization in New York City called Manifest Living. This organization gives people the tools to succeed in school and life. She provides these tools by holding workshops and performing motivational speeches around the world; though, this still hasn’t slowed her down.

Murray currently resides in New York City with her husband, son and daughter. While spending as much time with them as possible, she is working toward a Master of Science Degree in Clinical Psychology at Columbia University.

She continues to work for the reason that she believes in the love of possibility, as well as in life’s overall meaning: “No one, no one truly knows what is possible until they go and do it.”